So something pretty wild happened this past weekend: We won the HARRY KREMER AWARD for Outstanding Comic Book Retailer.

This was awarded as part of the Joe Shuster Awards, which recognizes outstanding achievement within the Canadian comic book industry each and every year. It still hasn’t fully sunk in.

When we first found out about our nomination, we both had small panic attacks. We’re not good at taking praise and only seem to stand tall when someone out there is telling us we don’t know what we’re doing. We’ve been working on these reflexes and find ourselves in a position where we’re now representing some of the very best in Canada. We do not take this responsibility lightly.

First, we want to recognize the many great shops we were nominated alongside this year. We have Alpha Comics, our provincial partner on this list, who has done outstanding work in Calgary introducing people to local creators and that creative community. There’s Cape and Cowl in Nova Scotia whose commitment to community is outstanding and whose safe space room is a particular inspiration. The Comic Hunter in New Brunswick and PEI, who works hard on not only providing their communities with access to comics, but great places to game. Then there is Comic Book Addiction from Ontario whose spacious and comprehensive store looks wonderful, and who runs a lot of gaming events, as well as a book club for women. Also in Ontario is Cyber City Comics, a place that diligently lets people know what new items have arrived while giving access to their large quantity of warehouse stock, which has to be a fun trip for folks digging for awesome treasures. Finally, there’s Curious Comics in BC, a store that also has many locations, serving many communities, and is actively developing communication with their customers through YouTube videos they produce themselves, and content they’ve curated through their account.

The Harry Kremer Award has been awarded to a very select few, including our city’s own Happy Harbor Comics. This is a legacy that we will honour by continuing to focus and grow in ways that we believe will be most helpful to the comics medium, and the ever growing comics community. That brings us to this: what does this award mean to us?

Well, quite simply, it means we’ve obtained a certain measure of vindication. Many of you will remember our past struggles with forces within this city and well beyond, telling us that the way we do things was not welcome in the comics community. We have no doubt that those people still feel the same way – but this, and everything else we do was never about them.

Some folks within this industry are so content to look inwards, never growing and never changing – and that includes ways in which they sell and market comics. At Variant Edition, we’ve always been careful to curate a welcoming experience, not just to some, but to all. We fight against ideologies that push for “comics for the few”. In doing so, we’ve been told that our fight for inclusivity is coming at the expense of those who have maintained power positions in this industry for years. We’re here to say: that’s a good thing.

The world is a dangerous place. That danger is reflected in our media both actively and passively, and as proprietors, it is our duty to be aware of what we’re selling, and aware of what those products say to people. While we will never restrict someone’s access to product (we have yet to refuse anyone an order when the product was available and pre-paid for), we do restrict what we promote on shelf and talk about online. We read the product, and showcase a wide range of topics, ideas and experiences. And we always will.

We are also not without faults. We are both white, heterosexual passing human beings – and while we are aware that the white and heterosexual power structures weren’t created by those living today, we recognize our responsibility having been born into that structure with inherent power. It means we’ve been given the means to wield, which we chose to use to burn the roots. We will call people out. We will not maintain the the status quo by being quiet. That said, being born with this power often means we’re less aware of that power’s effects, so we are also open to criticism, and willing to grow and better ourselves.

We want to thank our wonderful community for helping us with this. For helping us grow, and for growing along with us. We want to thank you for all of your support, both monetarily and emotionally, spending what little spoons you might have with us, and being a part of this store.

We don’t win awards like this without you, and we truly believe this award is yours just as much as it is ours.

Together? We became the very best in Canada. Just imagine what we can do in the next five years and beyond…

Thank you. -Brandon and Danica 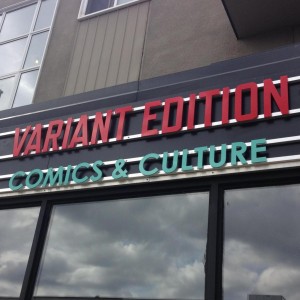 The Blogotron is definitely a real human person and not a robot that has been programmed to have feelings FOR SOME REASON. It wants to help you find stories to love. Wessssssllleeeeeeey.